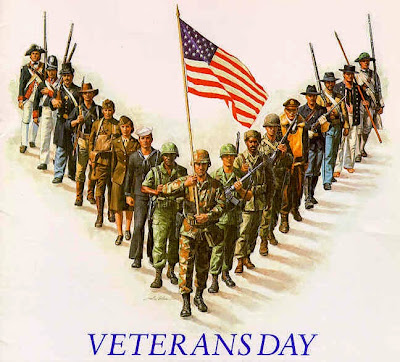 "Courage is almost a contradiction in terms. It means a strong desire to live taking the form of readiness to die." ~ G.K. Chesterton

This is a very important holiday here in the Bullock Household- What's Her Name gets all teary eyed for Veteran's Day and Memorial Day, and we join her and Dad in saying THANKS to those who served!  So, to honor her family, Mom is going to name the names of all of her ancestors and family who have served this great nation of ours in the military.

7)  Robert Gain Black, Jr (son of Robert G. Black, Sr and eldest brother of WHN)- both Gulf Wars, Bosnia, etc.  retired from US Army as a LTC,  Field Artillery
8)  What's Her Name- peacetime service in the US Army from 1984 to 1988- commissioned in the Ordnance Corps on the same day that she graduated from college.  Served in Italy and Germany and was living in Germany when the Berlin Wall came down.

9)  Geoffrey C. Bullock (Dad)-  USN Individual Ready Reserve- is currently a LCDR and will retire with 20 years of service in September 2012

Thank you to your family and an all the soldiers who were there to fight for our freedom. I can't imagine where we would be today without this brave men.

WE also Honor Those who Served our country.

Bless them all. How wonderful that you know who they are and pay tribute to them. Today we remember too. Have a terrific Tuesday.
Best wishes Molly