Only in America with Larry the Cable Guy: Cannon Fire

Photos from the Knights of Columbus Exemplification

What's Her Name is OUT OF CONTROL!

We just about sruvived the most awful week imaginable (well, except for the A Salt and Bunnery that His Mayoralness endured-  those rodents, how dare they!)

Grandma arrived safe and sound and stayed till last MOnday.  We were having a great time getting to know her too.  BUT.......  What's Her Name got very sick Saturday morning and DID NOT TELL Dad or Grandma until the very last minute- she did not want to ruin Dad's big day so she tried to gut it out.  It worked fine during the brunch but right before the Exemplification Mass- SHE FAINTED!  Grandma was already in the church and when Mom came to, she was crying so hard about ruining everything for them.  She begged everyon NOT to say anything to Grandma until after Mass.  An ambulance took her to the nearest hospital, and she was found to have low blood pressure and to be anemic and was released after only a couple of hours.  Grandma and Dad met her at the emergency room after Mass, which is what Mom wanted.  They took her home and everything was ok.  BUT......  On Sunday, Mom was still not feeling too well, and almost pased out again.  Dad called her bariatric emergency nurse and was told to get her to the hospital right away!  We stayed with Grandma while Dad took MOm back to CLeveland.  Mom was worried about Dad and Grandma since Grandma had to fly home the next day!  She only let Dad stay at the ER till 9 or so- he had to get home to us and Grandma and get some dinner (Mom is very silly sometimes)  Mom did't get to her room until 3:30 the next morning.  She had another EGD to see if there was bleeding where she had the surgery three weeks earlier and there wasn't any, but her blood pressure was very low.  On WEdnesday she had a colonoscopy and there wan't anything wrong and the bleeding seemed to have stopped on its own. She came home Wdnesday afternoon, and slept most of the day yesterday. We have not let her out of our sight at all!

Obviously, Mom needs lots of dachsies with moxie to look after her- she simply cannot take care of herself at all!
Posted by Agnes B. Bullock at 10:06:00 AM 5 comments:

Today is THE DAY!

Right now, Grandma is in the air, on her way to meet US!!!!!!  She should arrive a little after 1 PM  so she gets to meet us at home about an hour later.  WE have been good, so watch out Grandma!

(Ginger and Thai left only three huge Lake Effect puddles this morning!)
Posted by Agnes B. Bullock at 8:42:00 AM 1 comment:

What's her Name took Dad to her monthly Ladies Ancient Order of the Hibernians meting last night- she needed to be chauffered and needed help with all of her books and papers.  Since it was a joint meeting of the LAOH and the men's AOH, they met in the golf club's restaurant for dinner first.  Dad had the steak and Mom had soup, and she did not rave food. The soup was all she needed, two weeks to the day after her bypass!  We of course were cruelly abandoned, but we did show our dispelasure when they finally remembered we were waiting for them at home.  Next WEdnesday is What's her Name's first follow up and she is excited to see how much she weighs!
Posted by Agnes B. Bullock at 10:39:00 AM 2 comments:

Guess what?  Our grandma, Mom's mom, is coming for a visit on Friday!  We have NEVER met her.  She flies in Friday from Myrtle Beach, but has to leave Monday.  She is coming to see Mom and Dad and also for Dad's Knights of Columbus 4th Degree Exemplification on Saturday (they will be gone for 87 bazillion hours, but Mr Steve will be checking in on us every couple of hours!)  Mom has been running around with her head cut off, as usual, but worse!  Two trips to Walmart this weekend (we were stuck in the car) lots of spring cleaning- Dad is exhausted.  The small front bedroom has a new lamp, table, rug and bedding set, not to mention the new towels fro Granma to use!  We are NOT allowed in this room under any circumstances!  Dad was busy hanging stuff today, and helping What's Her Name with laundry and stuff.  Tomorrow the kitchen (Thai's command center) gets cleaned top to bottom and Wednesday is the bathroom.  We hear that we are getting baths on Thursday- can we run away and and stay with someone else for that?

Grandma likes dogs but HATES cats- we are NOT allowed to sleep with her either.
Posted by Agnes B. Bullock at 7:58:00 PM 3 comments: 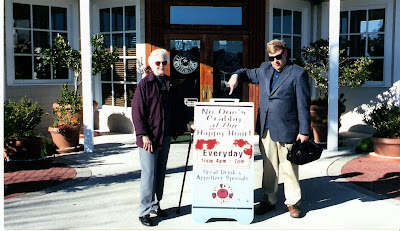 Yesterday was the first anniversary of the death of What's Her Name's godmother and aunt.  (SHe was also her mom's identical twin)  She was a large part of WHN's life growing up and as an adult, and she loved Dad- He called Aunt Regina and Grandma "The Twin Set" and they loved that nickname.  So much so, that after WHN and Dad were married in 2001 (this is a picture from their honeymoon in Myrtke Beach, SC), they conspired to make WHN's life miserable- telling all and sundry that Dad married WHN to be related to them!  Ginger actually got to meet her before she died, in November 2008, and we all went down to SC in February 2010 so that Mom and Dad could see her one more time.  Aunt Regina was a great lady, and set a world record for hospice care- 15 months of at home hospice care and then three mnths in the hospice itself.  She is greatly mourned and missed.
Posted by Agnes B. Bullock at 8:45:00 AM 1 comment: