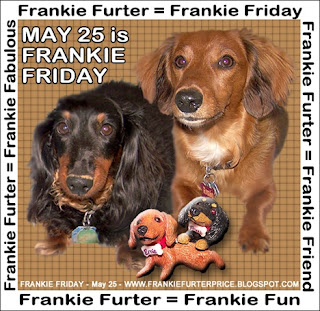 Today is the day for which Blogville has waited with baited breath!  Today is Mayor Frankie Furter Day!  At the behest of Miss Ruthie and the K9 Katastrophie, May 25th is Frankie Furter Day, in honor of his outstanding contributions to making Blogville the place that it is today.

His Honor has always been there for all of Blogville's residents, and especially for their peeps.  We, the DWM, met HH when we began blogging back in October 2009- he was our very first follower and we started following him. He was enthusiastic as our pack grew in size, and when Dad lost his job last August, he and his peeps were there for WHN and Dad.  When WHN started quilting again after a 20+ year hiatus, Miss L, the Furst Mom of Blogville, and Frankie were her greatest supporters.  We also had the honor and privilege of meeting His Honor and his peeps in the furs- that was a great day!  We watched as he adopted and raised ERnie- what a fine pup he has become.  We were there when he wed the two beauties from Canada, Mesdames Ruby and Penny- they shared their love and joy with all of us and have always been there when dark clouds have gathered in our lives, both peep and four legger. When Ginger died, WHN's first response was to reach out to HH and the Furst Mom and they were there for her (as was all of BLogville)  Today is Frankie's Day- may it be filled with milk bones, treats and squirrel chasing.

UPDATED!-  WHN wants to remind everyone that without Miss L, Furst Mom of BLogville and His Honor, the Fearless Five Quilt would never have happened!  WHN and Miss L had been emailing, tossing around ideas, and the brainstorm for the Fearless Five quilt came from Miss Lana herself.  She insisted that it be done and was tireless in asking Blogville for help and fabric!

Wow, what a sweet post for HH! He and Mamaw will be so amazingly surprised and thrilled! Thanks for joining in.
Grr and Woof,
Sarge A Licious

Sniff...sniff...I thinks I needs a snot rag or two or ten. Dis was wonderfuls!
We has all been so fortunate to has Frankie, Ernie, and Momma L in our lives. But you is even more fortunate to has metted them in da furs. Dat is cool drool...as Frankie would say.
Hail to da Frankie! What exactly does dat mean? It sounded good so I said it.

And YOU all KNEW about this... and didn't WARN me???? I am just Blown AWAY by the entire thingy... I (Frankie Furter) need some of those Snot Rags Puddles is tawkin about.

THANK YOU fur your wonderful words.

That was a beautiful post about Frankie. I just love the guy.
Blessings,
Goose

You said it well. We all love Frankie and his family.

Go Frankie!! He seems like he's earned it with all of his contributions :) What a great post in his honor!

Frankie is da bestest! May he and his furst family rule Blogville fur many years to come!

What a luvely post for Frankie! Luv the sentiment of milk bones, treats and SQ's :)

Waggin at ya,
Roo