Memorail Day 2011 and the Feast Day of St. Joan of Arc

The DWm will be attending the Memorial Day Parade here in Medina again!  What's Her Name has the treats bag packed already, camera loaded and extra batteries, and Dad is getting our drinks ready.

Today is also the Feast Day of What's her Name's favorite saint- St. Joan of Arc, who was executed on this date in 1431 at the age of 19.
Posted by Agnes B. Bullock at 7:17:00 AM No comments: Links to this post

"O how beautiful is the chaste generation with glory: for the memory thereof is immortal...." Wisdom 4:1
On Wednesday, May 30, 1431, the Vigil of Corpus Christi, Jehanne Darc, or Jehanne la Pucelle, "the Maid," as she called herself, was led into the public square of Rouen by enemy soldiers to where the stake awaited her. It was noon. Nineteen years old, her head shaven, surrounded by placards branding her a witch, idolatress, and abjured heretic, she invoked the Holy Names of Jesus and Mary, and St Michael the Archangel. She had been calumniated and condemned by those whose holy office it was to guide and protect her soul; she had been exposed to lewdness and impurity by those whose sacred duty it was to shelter her innocence and virginity. She was abandoned by the king whose crown her victories had won. She was in great interior darkness; the voices of her saints were silent.
Although she conversed with angels and saints, Joan the Maid was known to be practical and blunt. Very feminine, she missed her embroidery and her mother, yet she emerges on the pages of late medieval history like someone from the Acts of the Apostles. Surrounded by miracles, she was herself a Miracle; she led an army to victory at the age of 17, an illiterate peasant girl, who knew nothing of war or politics. She saved France as a nation, for it had all but ceased to exist when she came on the scene.
Such was her Faith that she confounded her judges, while exhausted, frightened and pushed to the breaking point of her mental and physical strength. Denied the Sacraments by her persecutors, she gazed upon the upheld crucifix, calling out, "Jesus! Jesus!" as the flames consumed her. When Joan's ashes were scattered in the river, her heart was found, untouched by the flames, and still bleeding.
"If I walk in the midst of the shadow of death, I shall fear no evil, for Thou art with me, O Lord Jesus." Communion Antiphon for the Feast of St Joan
St. Joan, pray for us!Catherine Delors explores the art and literature which honors La Pucelle. To quote Madame Delors:
But Jehanne is not content to win battles. She knows that military success is meaningless if it is not consolidated by the symbolic and religious power of the French monarchy. She convinces the Dauphin to have himself crowned King. Here she is, attending the coronation ceremony of Charles VII at Reims, still holding the banner she carried into battle. This moment is her work, and marks the peak of her glory in this world.
Posted by Agnes B. Bullock at 7:08:00 AM No comments: Links to this post

Gladiatrix.
Posted by Agnes B. Bullock at 1:53:00 PM No comments: Links to this post

Intervertebral Disc Disease Is Not A Death Sentence 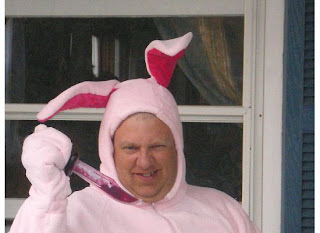 Yesterday after returning from WalMart with some seeds and greenhouses (What's Her Name is going to garden this year!) there was the most horrific screaming coming from under one of the trees right next to the driveway.  Dad thought it was a mouse and went to investigate and found nothing unusual, except for some fuzz.  Then the screaming started again- What's Her Name investigated and found BBk at work.  BBK is Baby Bunny Killer, and the baby bunny was found breathing hard, eyes still shut.  She made Dad put it back into its nest with its sibling.  Fur had flown everywhere!  The culprit was NOT Puddles, but her clever and sneaky imitator, Ginger.  She kept going back to finish off the poor baby, and Chip chased off its mama.  When the mama bunny came back, What's Her Name knew it was not a mouse being tortured, but a baby bunny.  We think the babies made it through the night- mama bunny was hanging around this morning.  Now, no one is allowed out onto the front lawn without a leash, since Ginger and Chip make a beeline for the tree.  Thai however goes his happy way to the grass to take care of business, but the BBK must be watched closely.

Dad thinks the attack happened because What's Her Name feeds us the rabbit kibble from Nature's Variety and Ginger became very fond of the taste.  Nevermind that What's Her Name mixes it with three other flavored kibbles to satisfy our taste buds- Dad insists that this is What's Her Name's fault!  (At least we get the low fat adult Innova kibble now- Baxter's favorite!  What's Her name did a huge Squeeee when PetSmart started to carry it last Saturday!) 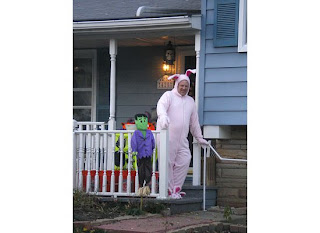 Email ThisBlogThis!Share to TwitterShare to FacebookShare to Pinterest
Labels: Ginger

Is That Your Boy? Private William Hudson in Aliens


From one of What's Her Name's favorite movies
Posted by Agnes B. Bullock at 8:23:00 AM No comments: Links to this post