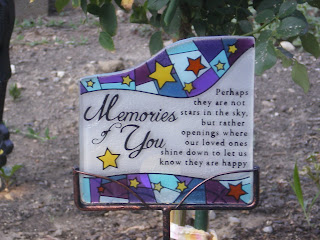 It has been only three days since His Majesty, Thai the Magnificent, The Thai Master, left us for the Rainbow Bridge.  WHN is still unable to sleep- no "Mr. Fussy Pants" keeping her up till 4 AM and the house is way too quiet, even with three dachsies in the pack.  The hardest part is meal times- no five bowls, no four bowls, just three bowls again.  No medications, no boney woney liver supplement, no belly bands, no messy beds.  No kitchen command post, no rolling command center.  No musical beds- we can now see the living room floor as there are no longer seven dog beds covering it up waiting for The Thai Master to make his choice.  No more gel packs at bed time, no getting up every fifteen minutes for a drink of water.  No more pill pockets and Tramadol to keep him calm and hopefully pain free.  no more the sound of his nails hitting the ceramic tile in the kitchen, no more supervision and no more opening the fridge.  No more walkabouts and no more happy go lucky grin, as he tried yet again to replicate the movie, The Great Escape.  No more resting his head on her foot while she used the computer, no more sleeping in the office on his special bed, no more removing Chip, Tasha or Anna from the dog bed that Thai wanted to use at that moment in time, irrespective of the fact that there are at least six others in the living room.  No more snuffley snoring no more car rides in the laundry basket and his telling us adamantly that we need to stop NOW so he can poop!  No more cleaning up after him.  WHN thought that she was prepared for Thai's journey to the bridge, but  obviously she has been lying to herself.  No more ear scritches.

We wish to thank all of Blogville for the kind condolences and the cards that have begun arriving.  Without you, WHN would be in even worse shape than she is.  The day before, on Sunday, we had attended the first Rainbow Bridge Walk in Medina, in honor of Ginger.  Thai enjoyed himself immensely- sniffing at other dogs from his camouflage command post, and eating treats, and just being the center of attention.  We had intended to ask our vet, who is involved in the Walk, on Monday to increase his heart medicine as he was starting to have trouble again.  He ate his Monday breakfast and then had a good walkabout on the front lawn- it took him almost an hour, but he made it down to the sidewalk with the biggest grin on his face.  We gave him his morning pills and went to the pool.  When we came home, we found his pills on the floor undigested and tried to give them to him again, but he started vomiting foam.  We knew what that meant and got him to Dr. Parker right away.  We knew on the trip there that there would not be a return trip for His Majesty, not this time and we were shaken by the thought.  Our fears were confirmed with the diagnosis of the lungs again being full of liquid and that his liver was failing.  We had to make a decision, and we did, tears pouring from our eyes as we made it.  I had promised Marcia that we would let her know, so I assumed that Geoff had her phone number in his cell phone (mine had been left at home in the rush to load the DWM into the car). And it wasn't- so I sent him home to get my cell and to make the call, while I held Thai.  I cried and begged him to forgive me for the times I was angry or short tempered with him for his fussiness, for needing me to get up every fifteen minutes of every night to get him water.  I was angriest with myself as I failed him- I was the peep and he was my tough guy.  When the time came, about 20 minutes later, Geoff was still not back, but I went ahead.  Geoff had held me up when Ginger died, so I would help Thai.  I wrapped him in his blankie, and held him as his right front leg was shaved.  I held him as the needle went in and I held him as he took his last breath.   He left being told that we loved him and that we wanted him to stay but knew that he couldn't.  AT least I hope he knows we loved him.  Thai was not a people dachsie at all- too much trauma for him when his original owner died and her daughter didn't want him.  He loved our pack, though and was always happiest in the middle of it.  He went everywhere with us, just like Ginger, Chip Tasha and Anna Rose.  He taught me patience and humility and in Thai, I see myself if I were a dachshund.  I miss him so. 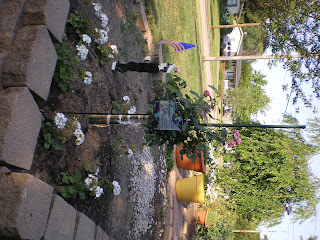 When Thai comes back, in a week or so, his ashes will be buried at the farm of his first love, Miss Marcia (his original foster mom)  She is devastated by his death and asked if he could be buried there and we agreed.

In the photos, you see the memorial garden that we started two months ago when Ginger left for the Bridge.  Look closely, and you will see an addition that arrived last night from The Comfort company, by way of the WDA and their peeps.  (if you are not following Sue and her White Dog Army, please do- they are wonderful friends and a source of comfort and strength in times of sorrow- they epitomize the best of Blogville) 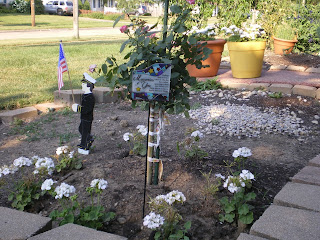 All those trials that Thai endured.. are behind him now... he is young and healthy and able to RUN FREE AND FAST.

I love the idea of him being taken back to his Foster Home. It is where he went to wait for his FOREVER HOME in Medina.

What a Treasure Chest jam packed with memories he has left for ALL of us. We will open it often and savor them.

As hard as it is to lose a loved one such as Thai, you have to remember ALL the good things that you shared together. You were an awesome and loving Mom to Thai and he knew that you loved him so. They are truly never gone, as they remain in our hearts forever.

Sending you comforting hugs across the miles.

Mommas crying now. She knows how you feel, she still puts down 4 bowls and calls 4 names. We love you all!
Nola

I'm so sorry about Thai Master. My heart is breaking for you and the whole pack.

Much love to each of you!

Thai can now rest and run pain free and put everything behind him. I am so sure he knew and felt the love as he made his journey and now he has Ginger up there showing him the ropes.

This was a beautiful tribute and thank you for sharing your story.

Rip Thai. say Hi to my Fred for me.

You did more for Thai than most people would. There may be a hole in your heart, but you can fill it up with more loving for the other three pups. What a nice gift from the WDA to add to the memorial garden.

We feel for you and yours and we know there is a great void but love will fill it up again and then you will be left with beautiful memories. That is the gift of love.
best wishes Molly

What a wonderful life Thai had with you and visa versa. Hold him in your hear forever!!

He is in a good place now, wagging in peace. We are all with you, spiritually.

So much emptiness and life changes at your home now. Thai was such a big part of your life and now he can rest and watch over you from the Bridge. You made the right choice for Thai and he will be forever grateful.

What a brave totally selfless and loving gift you gave to your tough little fighter, Thai. Peace and release from pain and a dignified end is what you gave your boy.

We are so glad that the garden plaque adds a touch of the positive to your lovely bed and hope that the words will give you some comfort in these times of missing your kids so much.

And, momma say put down ALL of the bowls. In many cultures that is done to honor the spirits of those who have journeyed beyond.

Dropping off some woofs & huggies! We are thinking of you. <3

We have not had the words to express how sorry we are. We are so sad and we just wanted to let you know you are in our thoughts and prayers!
~Milly, Shelby, and Maggie (the Mom)