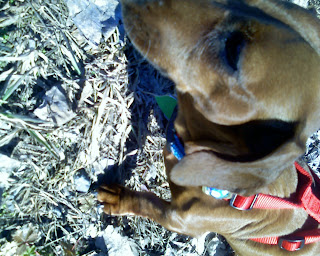 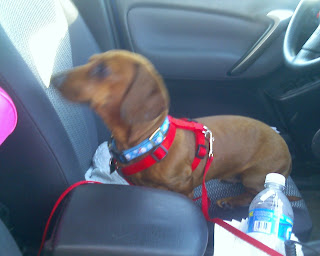 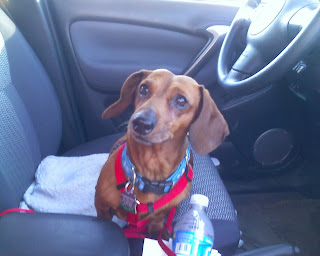 Yes, it is that time of year again- Today is the fourth anniversary of GINGER becoming the leader of our family!  Four years ago today, while we were living in a one bedroom apartment in SLingerlands, NY, just outside of Albany, we loaded up the car with a couple of blankets, and went to the home of DRNA Rep Michelle Warg, to meet Ginger and see if she would want to live with us.  We also took with us a set of pink booties for her, since we had lots of snow and we didn't want her feet to get wet. We expected to return the following week to pick her up as we had not yet made our payment for her!  She took one look at us, and history was made and our lives were never the same again!  She lived with several other dachsies and a German Shepherd and a cat or two, and slept in the daughter's bed every night.  Can we say spoiled?  She came right up to WHN and when she was picked up, put her snoot and snoobiedo (the long part of the face which holds the snoot) into WHN's face and that was it!  If she was put down for any reason, she did her trademark sit by self and was immediately picked up!  Imagine our shock when we learned that she could go home with us!  She came with her green bankie, a pink bag filled with toys, a snowman collar, a red harness and a leash, plus some food to get us through the first couple of days. During the car ride home (two hours!) She rode in the back seat for the frist and last time! We made a stop for food, and picked up hotdogs- of the three, she ate two!  As Geoff says, you are what you eat!  I do have photos of her eating these hotdogs, and will post them when I can find them.  We stopped at PetSmart and picked up food and treats, and returned to the apartment, where she met Max, Liffey and Bear, the cats!  She took over immeditaely. She of course slept in the Big Bed, and WHN learned how much room she was allotted in the bed!   On the second night with our family, Geoff was out of town, and Ginger just dove under the covers and slept curled up behind my knees and didn't move all night.  She still does that today, but on top of the covers.

Happy Gotcha Day, Ginger!  (The above photos are from that momentous ride home- still carry them on my phone!)

PeeEss- The Thai Master update- HE PEED LAST NIGHT!  wolfed down his breakfast and meds this morning and pooped both in his carriage and on the porch, which is what he always does.  He became very fussy all of a sudden last night, around 8:s0, which is his usual routine, so I put him out and he was sitting on the porch.  When I moved him, I saw a huge very wet Thai puddle!  Mr Fussy Pants is returning!
Posted by Agnes B. Bullock at 5:50:00 AM

Email ThisBlogThis!Share to TwitterShare to FacebookShare to Pinterest
Labels: Ginger

HAPPY HAPPY GOTCHA DAY # 4 TO YOU GINGER!!! That is so wonderful. I hope that you get to do many fun thingys and have fangtastic foods.


YEA Thai. You keep up peein and poopin and EATIN. I knew you could do it buddy.

Happy Gotcha Day Ginger! You sure picked the right home. I hope Thai continues to feel better and has a good visit with the vet today.

Hap-Pee Hap-Pee Gotcha Day, Ginger! You made the best possible choice of a new home to go to.

And..Thank Dogness! Thai, you peed! This is the best news I've had today. Welcome Back!

HAPPY GOTCHA DAY SWEET GINGER!!!!!
Hers just knoew from dat moment hers was gonna go to da most perfect home evers and be loved unconditionally!

Hey Ginger!
Wow, Happy Gotcha Day to you! You are part of a perfect pack and I hope you have a wonderful day. Great news about the Master!
Grr and Woof,
Sarge, COP

Happy Gotcha Day, Ginger! It was a perfect day when you and your family found each other...we hope the Angels continue to watch over you all so you have many many many more joyful celebrations of togetherness.

Sorry we missed your big day. Another great love story!