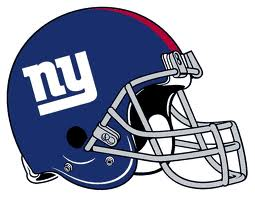 What's Her Name is a HUGE fan of the New York Giants, ever since she was three years old.  NEVER even suggest in her hearing that her beloved Big Blue will not win- THAT is a statistical improbability that will get you banned furrever!  Her beloved Big Blue again enters this magnificent sporting event as the underdog, yet in teir previous three apperances, they appeared as the underdog and WON.  First, back in 1987, when she was stationed in Germany, The GIANTS defeated the Denver Broncos to the shock and horror of all (except WHN, whe knew that they would win)  Fast forward a few years and again, her darling appear in the Big Game, this time against Jim Kelly and the Buffalo Bills, again the underdogs- BEST GAME EVER- The Big Blue took down the Bills and won by one point!  Four years ago, history repeated itself.  her beloved underdogs appear against the undefeated Patriots and made history!  Yes, this game was even better than the blow out over the Bills- In the last two minutes, ELi Manning led and crushed the undefeated Patriots!  No team deserved that whipping that year.  Today, Eli and Company will again appear, in  Indianapolis, home town of Big Bro Peyton and the Indianapolis Colts. This time, the Pattie girls are NOT undefeated- Big BLue stomped all over them on their home turf in Massachusetts during regular season play.  Crybabies all claim that Brady was off due a bad ankle, but he is game for today!  Sorry, but ELi overcame him four years ago and will again today!  GO BIG BLUE!!!!
Posted by Agnes B. Bullock at 10:08:00 AM

Let's go Giants!!!! We remember that game like it yesterday. Poor Tom Brady! NOT

Yahoo!! Congratulations on the Giants win.

We was hoping the Texans could have made it to the Super Bowl but since thet didn't we're glad you team won.
{{{huggies}}}....Mona

Want to hear something cool? Bokeh (my brother) his aunt was one of the superbowl entertainers. She does frisbee and was hired to entertain people during superbowl week, how cool is that?