No Sheeples Here: July 20, 1969—Fuelling Our Dreams And Imaginations

No Sheeples Here: July 20, 1969—Fuelling Our Dreams And Imaginations 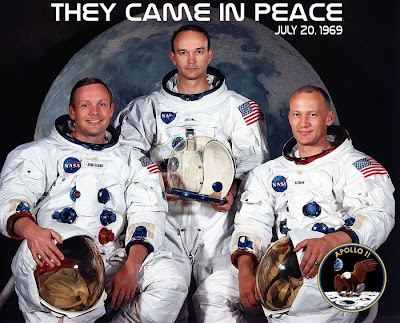 The American effort to send astronauts to the moon has its origins in a famous appeal President John F. Kennedy made to a special joint session of Congress on May 25, 1961: "I believe this nation should commit itself to achieving the goal, before this decade is out, of landing a man on the moon and returning him safely to Earth." At the time, the United States was still trailing the Soviet Union in space developments, and Cold War-era America welcomed Kennedy's bold proposal.
On July 16, 1969 with the world watching, Apollo 11 took off from the Kennedy Space Center with astronauts Neil Armstrong, Edwin Aldrin Jr., and Michael Collins aboard. After traveling 240,000 miles in seventy-six hours, Apollo 11 entered into a lunar orbit on July 19. The next day, at 1:46 p.m., the lunar module Eagle, manned by Armstrong and Aldrin, separated from the command module, where Collins remained. Two hours later, the Eagle began its descent to the lunar surface, and at 4:18 p.m. the craft touched down on the southwestern edge of the Sea of Tranquility. Armstrong immediately radioed to Mission Control in Houston, the now famous message: "The Eagle has landed."
At 10:39 p.m., five hours ahead of the original schedule, Armstrong opened the hatch of the lunar module. As he made his way down the lunar module's ladder, a television camera attached to the craft recorded his progress and beamed the signal back to Earth. An estimated 500 million people around the world waited with bated breath crowded around fuzzy television screens and radios as Armstrong stepped down the lunar module's ladder and onto the lunar surface.
At 10:56 p.m., Armstrong said, “That's one small step for man, one giant leap for mankind." He then planted his left foot on the gray, powdery surface, took a cautious step forward, and humanity had walked on the moon.
Only twelve earthlings have walked on the surface of the moon, the Earth's lone mysterious satellite, which has fuelled our dreams and imaginations since the earliest humans walked the planet.
Read more: http://nosheepleshere.blogspot.com/2010/07/july-20-1969fuelling-our-dreams-and.html#ixzz0uDrId6Oc


I was almost 7 when this happened (I share a birthday with Neil Armstrong).  My Dad worked for Grumman Aerospace, the company that made the lunar module.  AS an almost 7 year old, I was convinced that Dad was personally responsible for the Moon landing, even though he was the Director of Federal Legislation, not an engineer.  (As an almost 48 year old, still know that it was because of Dad that we went to the moon- don't get me started on the F-14 Tomcat, another of Dad's stellar achievements!!!)
Posted by Agnes B. Bullock at 6:57:00 AM

This is the most wonderful post. My mom remembers that magical night sooooo well. That is grrrreat to know that your "grandpa" Put Neil A. in the moon. hehehe
You know mom can even remember when John Glenn circled the earth 3 times! He was born and raised in New Concord, you know.
Those two occasions were examples of just how grrrreat this country can be.

How about Ohio- both were born and raised her and both still live in Ohio!!!