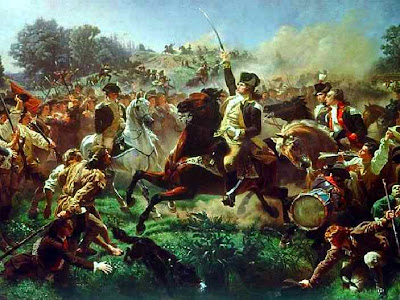 
Today, in 1778 , the Continental Army fought to a draw at the Battle of Monmouth. It was its own kind of victory.

MOM's ancestor Jacob Maple fought in this battle- He was with the Middlesex Milita.  He moved to Pennsylvania, Maryland and finally Ohio, settling first in Jefferson County them Coshocton County.  Mom is descended from his son William, thru his grandson Isaac, thru his great grandson Albert Gallup Maple who fought in the Civil War, thru his great great grandaughter Lida Maple Black, thru her son Albert Gain Black who fought in World War I, through his son Robert Gain Black, who is Mom's Dad.
Posted by Agnes B. Bullock at 7:45:00 AM

Ohhhhhhh that is very much interesting. You have a famous ancestor.

Not famous, just a patriot. He later moved to Ohio, first Jefferson then Coshocton Counties